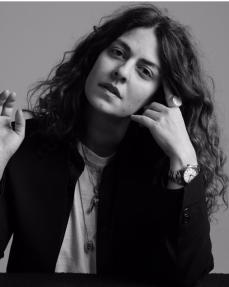 jina khayyer is a writer, poet, journalist, academic and curator.

khayyer studied painting at the bauhaus in dessau and journalism at the deutsche journalisten schule in munich.

since the late nineties khayyer has contributed to newspapers like die zeit, süddeutsche zeitung and die welt (germany),

to era-defining pop-cultural magazines like 032c, the gentlewoman, fantastic man, zeit magazin, purple magazine, monopol, pin-up, the happy reader and french newspaper libération, portraying the greatest artists of her time from the fields of fashion, film, art and music.

khayyer is best known for questioning and challenging the concepts of race, identity  heritage, gender, desire and misfit and for exploring such questions as how-not-to-break.

since 2006 khayyer lives and works in paris, france.

the first one lust not love was published in 032c.

in september 2015 her first book, älter als jesus, a genre-bending memoir, was published.

khayyer writes in german and in english, speaks fluently french and her mother tongue farsi.